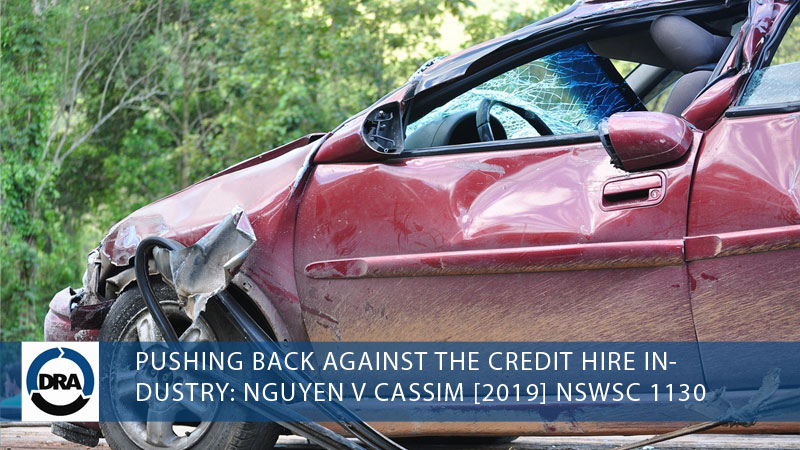 What has caused controversy in recent years is what a plaintiff is entitled to when they hire a replacement vehicle through a non-mainstream hire company of the type referred to as “credit hire” companies. In these types of arrangements, the credit hire company provides the claimant with a replacement vehicle that is (at least theoretically) similar in value to the damaged vehicle at no upfront costs to the claimant, in exchange for the claimant authorising the credit hire company to pursue the at-fault party to pay the amount of the rental as compensation for loss of use of the damaged vehicle. The costs of these arrangements are generally much greater than the cost of hiring a vehicle from a mainstream hire company. This is because the credit hire company is providing credit over the period of hire and until the expense is recouped and taking on the expense and risk of pursuing the claim.

It has been settled law in NSW that, generally, a plaintiff is only entitled to recover the market rate for the hire of a vehicle regardless of the actual rate charged by the individual hiring company. Nguyen v Cassim, a recent Supreme Court of NSW decision, takes this one step further, and says that parties are only entitled to recover the market cost of a vehicle that would satisfy their needs, rather than a vehicle of equivalent value to the damaged vehicle.

In terms of the facts of the case, Nguyen whilst driving a vehicle, collided with a 2012 BMW 535i owned by Cassim. Cassim used his vehicle partly for business, partly for social and domestic purposes. Cassim’s vehicle was in repairs for 143 days. Right2Drive, a credit hire provider, provided Cassim with a Nissan Infiniti Q50 for a period of 84 days. The total amount of the rental hire was $17,158.02. Right2Drive then issued proceedings under Cassim’s name in the local court of NSW claiming for the $17,158.02 as “special damages”, meaning the actual cost of the rental vehicle for the period in question. Nguyen argued that a less expensive replacement vehicle would have met the needs of Cassim. Specifically, hiring a Toyota Corolla for an equivalent period would have cost $7,476. Nguyen’s argument was rejected by the local court and Cassim was awarded compensation for the hire cost of the Nissan Infiniti Q50 and interest, being a total of $18,818.44.

The decision of the local court was appealed by Nguyen to the Supreme Court of New South Wales. On appeal His Honour Basten J, overturned the local court decision, finding that when a motor vehicle is damaged in a collision, whilst being repaired, the Claimant is only entitled to the cost of hiring a replacement vehicle that meets the needs of the Claimant, rather than the cost of an equivalent vehicle of same value.

Cassim submitted that he used his vehicle for his business for transporting purposes and for social and domestic use. At 53, His Honour stated “the purpose is to provide an appropriate sum in compensation to alleviate, so far as reasonably possible, the inconvenience resulting from the loss of use of the damaged vehicle; not to replace the owner’s vehicle with the temporary use of another vehicle of equivalent value or prestige”. His Honour was satisfied that a Toyota Corolla was sufficient to meet the needs of Cassim. The judgment of the local court was therefore, set aside and a new order was made for the at-fault party to pay the costs of a Toyota Corolla at a cost of $7,476.

The decision of Nguyen v Cassim will certainly have an impact on credit hire car claims. Insurers are likely to pay less in claims for replacement hire vehicles as the decision of this case makes it clear that claimants are not entitled to replacement hire vehicles of equivalent value, but one that would reasonably meet their needs and compensate for their inconvenience. Finally, it is worth noting that Right2Drive can still appeal this decision.