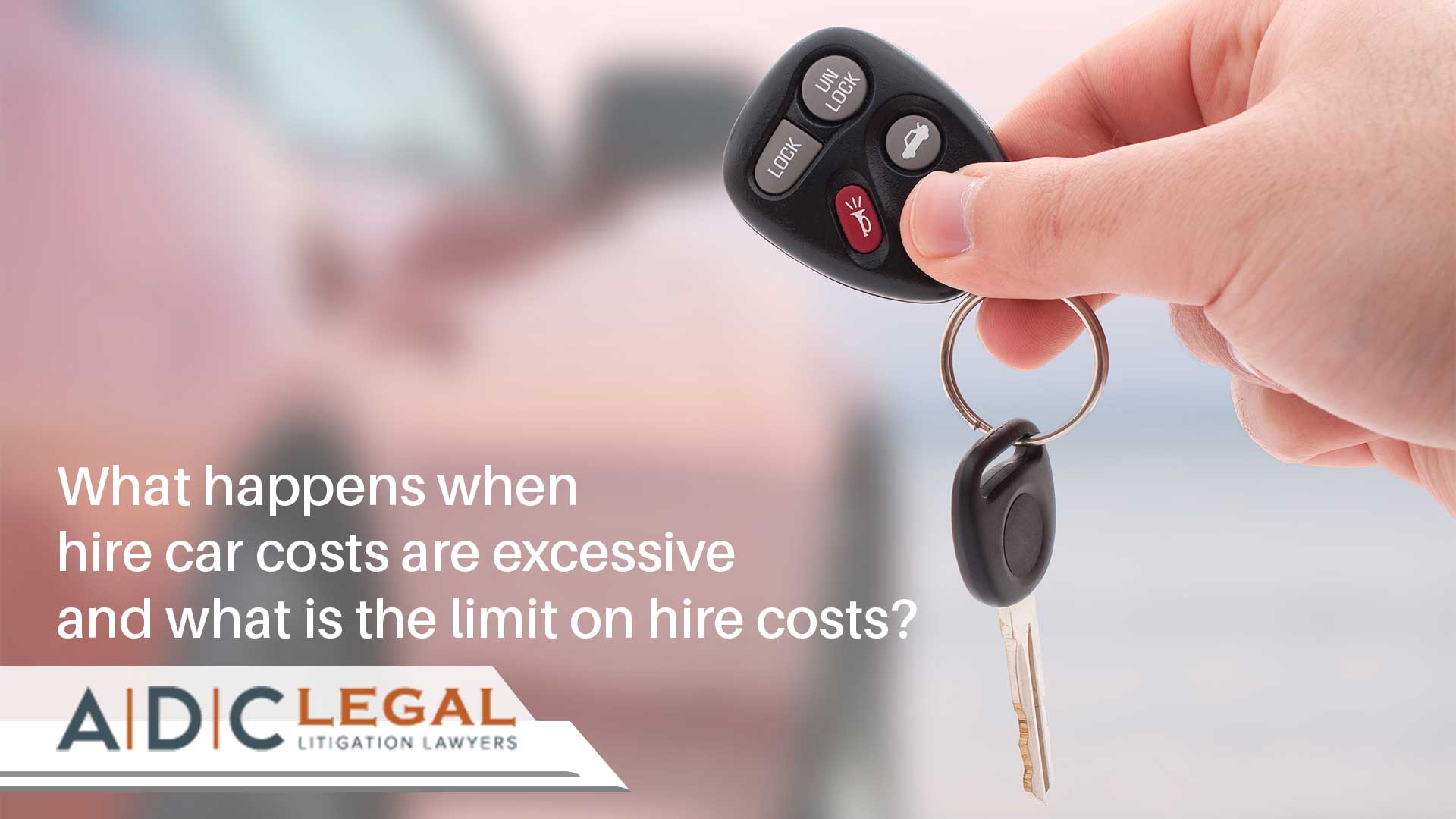 In a recent Victorian Supreme Court decision, the Court found that 52 days of hire car costs was not unreasonable.

Summary of the case

In Fallon v Johnston [2017] VSC 273 Jessica Johnston owned a 15 year old motor vehicle of low value. On or about 13 January 2017, it had a collision with a motor vehicle being driven by Vincent Fallon, rendering it undriveable and probably a write-off. Alleging Mr Fallon was negligent, Ms Johnston issued a proceeding in the Magistrates’ Court of Victoria claiming as damages (among other things) the write-off value of the vehicle and hire-car costs.

Ms Johnston hired a vehicle a few days after the incident date. Sometime after the collision, Ms Johnston contacted Mr Fallon’s insurer, AAMI to enquire if she needed to change hire car companies. AAMI advised that she did not have to. After 52 days AAMI paid Ms Johnston $5,460.00 in respect of the write-off value of her vehicle. Soon afterwards, Ms Johnston obtained finance and bought a replacement vehicle. The costs of the hire car claimed by Ms Johnston was a total of $8,808.00 for 52 days.

Ms Johnston gave evidence on her financial position. She ran a small business with her sister. Throughout the hire period, there was usually between $26,115.83 and $31,680.73 in the business account, and never less than $22,000. Her evidence was that she and her sister kept such a sum of money in the account to act as a buffer against potential unforeseen business expenses. The business’ turnover was about $130,000 before tax. Her personal taxable income in the previous financial year was $68,333. Ms Johnston agreed that a replacement vehicle was going to cost around $6,000, however her evidence was that if she did make such a purchase, her finances may have been stretched.

The Magistrates’ Court had to decide whether Ms Johnston had acted reasonably in hiring a vehicle for 52 days, and not purchasing another vehicle, having regard to her general obligation to mitigate against incurring further losses. The Magistrate rejected Fallon’s arguments, looking at the evidence of Ms Johnston’s finances, His Honour commented that ‘if she considered that it was unreasonable to use the money in that bank account to purchase a replacement vehicle when matters were still in dispute, then I do believe that she has acted reasonably in all the circumstances.’

The matter was later appealed by Fallon. The issue on appeal was whether His Honour had erred in applying a subjective test of reasonableness rather than an objective test.

Justice Bell first looked to numerous authorities on the principles of damages and mitigation and observed that the authorities ‘emphasise that the plaintiff must take reasonable steps to mitigate their loss’, that the test is an objective one, but that it applies in a way that takes the circumstances of the case into account. His Honour agreed that a subjective test would have been in error of law. What is reasonable will turn on the facts of each case. His Honour commented that ‘the courts do not apply a high standard of reasonableness’. Reasonableness is not to be assessed with the benefit of hindsight, nor is it a ‘notional accounting exercise’, nor is it the sort of decision where the Court will weigh up the pros and cons of alternative courses of action.

What we learn from the case

The case functions as a restatement of the principles to mitigate against loss but serves as a stern reminder to the motor vehicle insurance industry the importance of timeliness. A quick settlement for clearly written-off vehicles will severely reduce the costs of a hire car.

For lawyers, it is worth to note that Fallon did not argue that the daily rate of Johnston’s vehicle, $169.38 per day ($8,808 / 52 days), was excessive and unreasonable. The rate could have been successfully contested. It is also worth noting that the principles expressed in Stocovaz v Fung9 would be directly referable to this question in the sense that $169.38 falls well outside of a reasonable range of market equivalents. As a test, we sought online quotes from household name market leading car rental companies and found that a full size sedan can be hired for under $60 per day, or under $100 per day with the excess reduction option selected. By leading sufficient evidence on market rates, a submission that $169.38 is excessive and unreasonable due to being outside reasonable market rates would be successful. We consider that the Plaintiff need not mitigate by selecting the cheapest rental car available, however, we believe the Plaintiff bears at least some onus to assess market rates as well as their need for a particular type/size of the vehicle.

It appears that Fallon’s insurer was running this as a test case to see if the Court would place a limit or offer some guidance on hire car claims. His Honour commented that circumstances are bound to vary from one case to the next, and rejected the implication that 14 or 21 days should be treated as a general rule. We are concerned that some in the industry may take this case to be the Court’s stamp of approval for arguably excessive hire car claims on the basis that the Court will ‘not apply a high standard of reasonableness in relation to mitigation of damage’. We also note the less forgiving position in the NSW with respect to market rate and duration of hire.

We refer to the Court’s repeated comments that ‘what is reasonable depends upon all of the circumstances’, and remind insurers to be proactive in settling their claims. One pragmatic solution for the industry would be for the at-fault insurer to arrange a hire car for the not-at- fault driver to obviate consequential losses and also to keep costs under their control.