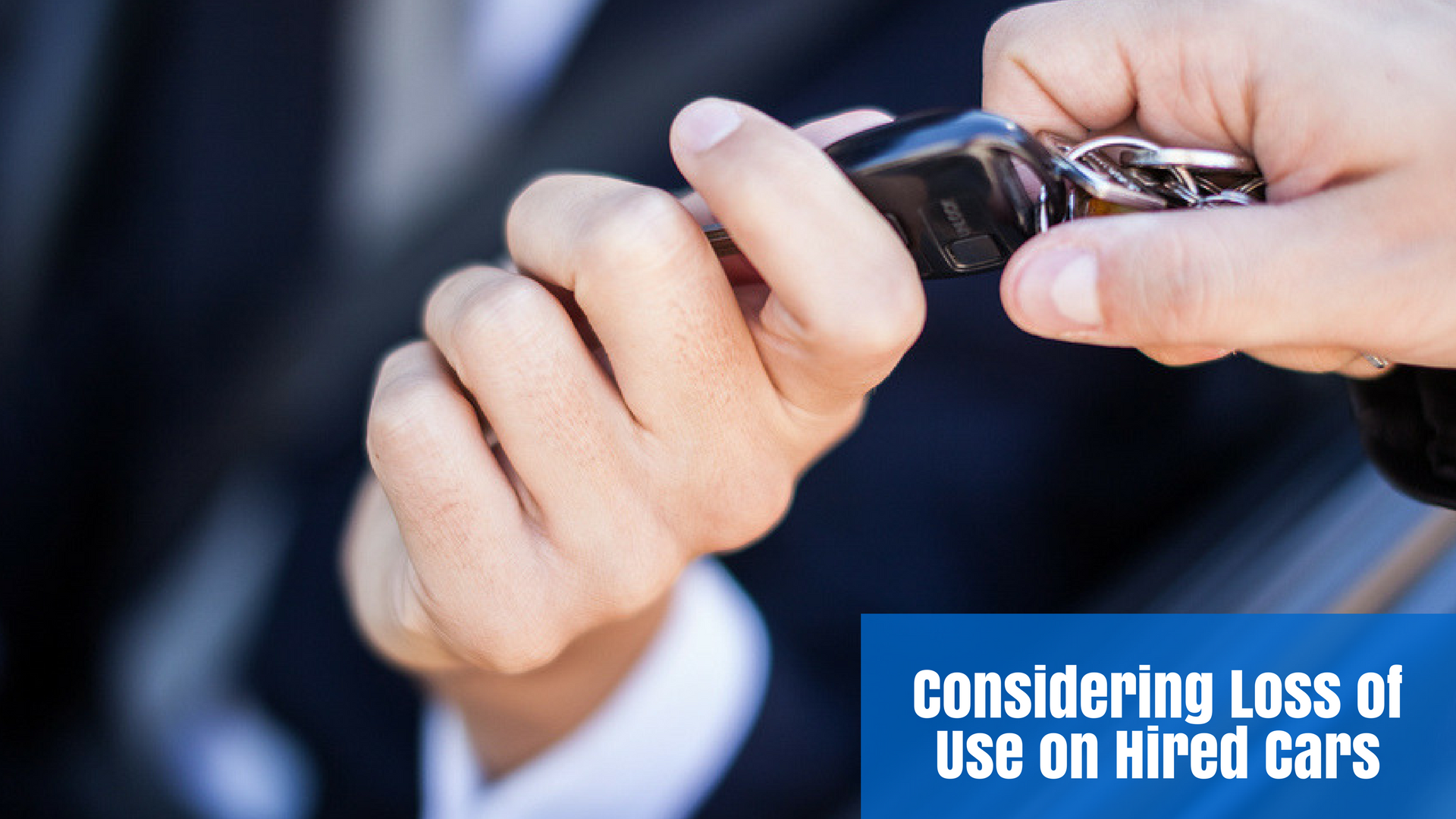 Considering Loss of Use on Hired Cars

In cases where you, your employee, or your insured was the at-fault party in a motor vehicle collision, it is reasonably foreseeable that at some point after the incident you will receive a letter of demand in which loss of use, namely hire car costs, will be demanded against you.

Unfortunately, it is very common for these supposed loss of use demands to be large amounts, pertaining to lengthy repair times and often exceeding the value of the vehicle damaged in the collision material to the demand.

The current status quo when it comes to ascertaining what loss of use is to be paid, is geared heavily towards the not-at-fault driver’s favour. This is because the Court’s view is that loss of use is an acceptable cause of action that has a causal connection to the collision and is foreseeable by all parties. Therefore, the victim is entitled to damages for the loss of use. This is made worse due to the Court’s tendency to calculate damages robustly.

However, this does not immediately mean the not-at-fault driver can go out and hire an exceedingly expensive replacement vehicle on any terms, after all, there is reasonableness to consider.

Firstly, it’s worth remembering that a plaintiff has a duty to mitigate their own loss but this only goes as far as ensuring they have taken reasonable steps to mitigate; with the question of what is reasonable and what is not often being the topic of much debate. However, it is fair to ensure the steps they have taken, if any, have not gone so far as to cause or allow an intervening cause to occur, which may alter their right to recovery of any alleged loss.

If the not-at-fault party has a genuine need for a motor vehicle, then it is foreseeable that they will seek a replacement vehicle or a hire car as soon as possible.

Generally, the hire car obtained is taken on credit hire terms, often on the recommendation of the tow truck driver or the vehicle repair shop, who upon discovering that the driver is the not-at-fault, may advise them that they do not need to make an insurance claim themselves as everything can be handled without the insurers involvement by a third-party debt recovery agent or law practice.

It is not uncommon for the hire car company and the repairer to have an informal arrangement between them with respect to this type of situation. Often a recoveries agency and/or lawyer is also involved in this arrangement in some form as well.

One of the first steps taken is to have the not at fault driver enter into a Hire Car Agreement as soon as possible.

It’s worth noting that these hire agreements give the hire company the right to pursue recovery of damages and loss of use costs against the at-fault party. This is achieved either by subrogation or assignment. However, it is common for the hire agreement to also stipulate that in the event full recovery is not made, the hirer may be required to repay the balance to the hire company personally.

Once the driver is signed up, the enforcement action begins with demands being made against the at-fault driver and their insurer for all losses, including but not limited to; damages, assessment fees, loss of use, recovery costs and legal costs, just to name a few.

However, that is not to say there is nothing you can do to limit your exposure to, and or contest these demands.

If you act for an insurer then immediately upon your insured lodging a claim and you determining that liability is going to admitted, contact the not-at-fault driver and offer them the opportunity to have their vehicle repaired, and a replacement vehicle arranged by you.

This has the advantage of keeping costs under your control and may limit your exposure to excessive demands. Obviously; it is not always possible for this to occur due to delays in the insured reporting the collision to you. Additionally, the offer may simply not be accepted or even contemplated by the other side.

We recommend that you then seek the not-at-fault driver’s advice as to who their insurer is so that you may contact them and deal with their insurer directly before the third-party debt recovery agents involve themselves. This has the effect of involving their insurer in the dispute. Their insurer may demand the vehicle be repaired by their own preferred repairers and the claim handled by them, thereby taking the vehicle away from the repair shop and debt collectors where the arrangement was started.

If step one has been unsuccessful or the not-at-fault party is uninsured, unhelpful or unwilling to lodge a claim with their insurer, then upon receiving a demand and acknowledging that liability is admitted advise the other side that you require their proof of loss for immediate consideration, including but not limited to:

Also advise the representative that you will require a period of time to have this material considered and assessed and remind the them that they have a duty to act reasonably prior to commencing any threatened legal action, failing which you reserve your or your client’s rights to rely upon that correspondence as evidence on the matter of costs if they proceed with litigation.

Whether they do or do not bank those funds is irrelevant irrespective of whether they advise that they do not accept those funds. The Court will consider the act of payment from your office as being, at the very least, a part payment that should have been banked by the plaintiff as it did not prejudice their rights. It therefore follows that the plaintiff would not be entitled to additional costs or interest after the date of that act of payment.

Please note, this payment will not generally end the matter immediately as the other side’s lawyers or recovery agents will go on to seek full payment of any funds outstanding.

Upon receiving a demand for a loss of use component, you will want to follow a similar path as listed above. Again, speed is the key as delays will not be looked at favourably by the Court if litigation is started.

Ensure you have the rental agreement and check the dates:

If the rental period appears excessive:

Note: it is a common response that the delay was caused by a parts delay due to most vehicles now originating from overseas and the only evidence of this being a mere sentence in an email from the repairer themselves.

A suitably qualified assessor ought to be able to contact parts suppliers in the area near the repairer to ascertain whether this is in fact true or not. As such, a parts list is needed on the repair invoice.

If it is found that the parts were available, then you have a strong argument that the repairer failed in their duty of care to the plaintiff and/or wilfully breached this duty.This is potentially an intervening act, a voluntary human action which the Court may regard as breaking the chain of causation and significantly reducing your liability.

If a vehicle has been written-off and the vehicle damages paid already as listed above, it is not uncommon for the Courts in some jurisdictions to consider the plaintiff’s financial capabilities in light of the fact that they received a payment from their insurer for damages.  The Court may determine that the plaintiff ought to have reasonably purchased another vehicle or otherwise made alternative permanent transport arrangements within 14 days or another reasonable period of time, after this payment was made thereby potentially limiting your liability for loss of use demands to a lesser amount.

Is the hire vehicle similar in size and style to the vehicle material to the claim or was it significantly better? The Courts may not award the plaintiff damages if the replacement vehicle was not a like for like replacement, or the difference between models was excessive, however it is not clear where they draw the line.

Ask why the not-at-fault driver needed the replacement car.

Check what additional options were listed in the rental agreement and question their recoverability.

Once the assessor has considered the parts availability, repair time and loss of use period, seek their advice about what repair period was needed and pay this amount as per the advice given in step 4 above.

It’s worth remembering that the key to dealing with these demands is speed, with litigation intended to only be a last resort.

ADC Legal Litigation Lawyers is a legal practice specialising in commercial advice and litigation, debt recovery and insurance claims recovery disputes. For more information, email us at email@adclegal.com.au or call 1300 799 820. Talk to us about your litigation or dispute concerns via Skype at adclegal.

← How to Manage an Accounts  Receivable Portfolio
Be Aware: Facts About Getting Into Debt →